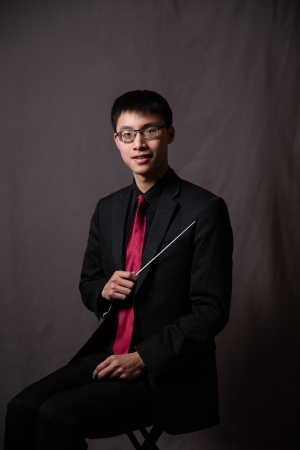 In addition to being SAO’s music director, Matthew Poon is also music director of the Markham Wesley Orchestra and conductor of the Toronto Chinese Orchestra, where he was winner of their 2015 Conducting Competition. Previously, he served as assistant conductor of the Kindred Spirits Orchestra in Markham, the McMaster University Choir and McMaster Women’s Vocal Ensemble. Matthew’s guest appearances include performances with the University of Toronto Symphony Orchestra, Toronto Better Homeland Choir, and McMaster Concert Band.

Having earned masters degrees in orchestral conducting and music theory, Matthew is currently pursuing a Ph.D. in music theory at the University of Toronto. He earned a bachelor’s degree with a diploma in music performance from McMaster University, and an associate’s diploma (ARCT) in piano performance from the Royal Conservatory of Music (Toronto). Workshops have allowed Matthew to study with conducting teachers such as Chih-Sheng Chen, Harold Farberman, Gustav Meier, Jorge Mester and Paul Vermel, among others. Matthew speaks English and Cantonese and has a working knowledge of Mandarin and German.

Matthew’s musical interests extend beyond conducting into composing and arranging, music cognition research, and teaching, where he maintains a studio both privately in Markham and with Arcadia Academy of Music in Richmond Hill.

Learn more about Our Vision and Mission

Learn more about The Orchestra

Find out about Our Orchestra Members

Look at our Photo Gallery

Read what People Are Saying

Enhance our vision … Give us your Feedback

We are a community orchestra – We fill our lives with music and we share it with others!

Celebrating 5 musical seasons!June 2nd, 2019
Thanks to our wonderful audience! It was great fun to play for you. We hope to see you again in our upcoming 6th season!