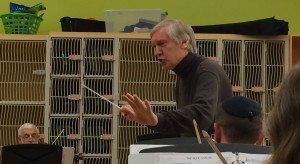 Ricardo (Ric) Giorgi is a busy Toronto jazz bassist, pianist, singer and the founding conductor/music director and co-founder of the Strings Attached Orchestra. In 2014, Ric and a group of devoted string players decided to start the new Strings Attached Orchestra, with a vision of building a member-driven and musically inspired community orchestra.  Ric stayed with SAO from 2014 through 2015, helping build and create the foundation of today’s orchestra.

Ric’s earliest musical training was in a choir run by nuns in a refugee camp in Northern Italy. In Canada, he started playing flute in high school and soon added the string bass and piano. He joined the Erindale Strings and worked his way through the University of Western Ontario Faculty of Music playing with the best musicians in London, Ontario.

Ric’s conducting studies included programs at The Conductors Institute at the University of South Carolina Orchestra, the University of Tennessee Symphony Orchestra, and Orchestra Zlin Czech Republic. He conducted or co-conducted various levels of ensembles for the Scarborough and Toronto District School Board Music Camps, the Scarborough Schools Symphony Orchestra, and the Concert Orchestra, (including gala performances at Roy Thompson Hall).  He has conducted the Brampton Symphony Orchestra, the Timothy Eaton Memorial Orchestra, the Main Street United Church Festival Orchestra and orchestras assembled for corporate functions in and around Toronto and Buffalo, New York. He led the very successful Rainbow Gardens Jazz Orchestra from “basement band” status to international acclaim. After taking early retirement from the Toronto District School Board, where he was an Itinerant Strings Specialist for almost 20 years, he became the founding conductor of the Resa’s Pieces Strings for four wonderfully successful seasons.

Ric has composed music for film and television and contributed to various CBC and CTV productions, including one episode from the program “The Earth” that won a Peabody Award for Science Education. He was commissioned to write the UNICEF Canada campaign song.

Ric says, “I love all music and I love helping others experience the joy that making it brings to both them and their audiences. Each week I get to stand before musically inspired adults who put aside work, family and other cares to join together to make beautiful music out of thin air. What could be more awesome than this? – Nothing, period.”

Learn more about Our Vision and Mission

Learn more about The Orchestra

Find out about Our Orchestra Members

Look at our Photo Gallery

Read what People Are Saying

Enhance our vision … Give us your Feedback

We are a community orchestra – We fill our lives with music and we share it with others!